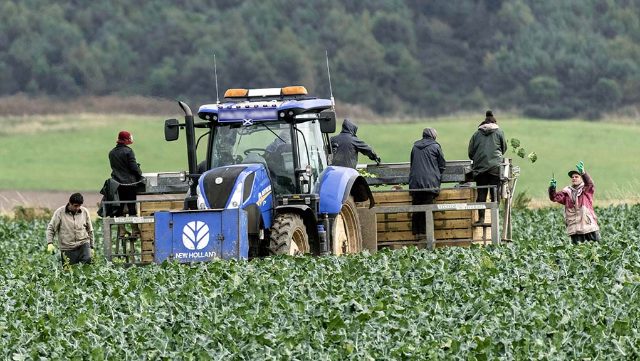 Prisoners could help alleviate the ongoing staffing crisis triggered by the impacts of Brexit, the Covid-19 pandemic and perceptions about career paths, following recent months of mass supply chain disruption.

Lance Harris, national sector lead for manufacturing, agriculture and horticulture at NFN, said the labour crisis had seen an increased interest in hiring prison leavers or serving prisoners released on temporary licence (ROTL), a scheme where, following a thorough risk assessment, those in the latter stages of their sentence are permitted to leave prison each day to attend a designated place of work and then return in the evening.

"The world has changed in the last decade and businesses are partly realising they need to look further afield and pick higher-handing fruit to fill job vacancies," he said.

With the prison population across England and Wales currently standing at approximately 78,000, recruiting prison leavers is the right thing to do for businesses.

"There is also a moral obligation to give people a second chance. Employment reduces the likelihood of reoffending significantly, which in turn reduces the number of victims, makes communities safer and glues families back together, all compelling reasons why organisations should consider recruiting prisoners through ROTL or once they have finished their sentence."

Mr Harris added people were often amazed by the raft of nationally recognised qualifications, experience and skills serving prisoners and prison leavers have.

"Not all prisons participate in schemes such as ROTL, but will send prisoners to work within the prison," Mr Harris said.

"Most will have done some land-based activities, from basic level grass cutting and tractor driving training to those with major horticultural and livestock programmes," he said.

"A high percentage of prisoners are from urban areas and so will not have had the same exposure to agricultural and horticulture to those from rural areas, but if they show aptitude, interest and motivation we will build a sentence plan which tries to enhance their skills, qualifications and experience so they are more likely to get employment within rural industries on release."

Qualities such as punctuality, being hard-working, taking instruction and being motivated, are also developed during prisoners’ sentence.

"Ninety per cent of organisations we have asked said they found prisoners to be loyal and reliable - who would not want workers like that?" Mr Harris said.

"Careful consideration is given to all organisations we work with to filter the right kind of person for the right placement on ROTL, and there are a range of jobs we can feed prisoners into, from hygienists to packers.

"The shortage of drivers is also real employment area for prison leavers and we have been working with those that have HGV and LGV licencing to steer them into the logistics sector."

Back in April, NFN held an open day at HMP North Sea Camp, Lincolnshire, which saw 20 external organisations tour the facilities and make a pledge to explore employment opportunities on ROTL or release.

"Further plans are in pipeline for other prisons across England and Wales to host an open day and attract potential business partners," Mr Harris said.

"People are being released from prison every day so it is important to understand what an organisation needs in terms of its employment vacancies and what we can do as a prison to help."

How agricultural businesses can benefit

Businesses interested in tapping into this labour resource have been directed to the NFN Offender Employment Campaign.

Mr Harris said: "After a firm has completed the booking form on our website and sent through some sample job descriptions, our team will assess the business’ needs, person specification and geography.

"We will then link up with the prison’s resettlement team to identify serving prisoners coming up for ROTL or nearing the end of their sentence and suggest they go for an interview."

On October 21, the Ministry of Justice hosted a virtual summit for businesses to find out more information on how to recruit people from prison.

Find out more information at newfuturesnetwork.gov.uk

"Bernard Matthews has a long history of working in the community and we feel that giving people an opportunity to restart their work lives is a really fantastic thing to do," Mr Sherwood said.

"Because of the lack of young people locally that were unemployed, we went out and proactively looked for other groups that needed a helping hand, which led us to work with the prison."

Mr Sherwood added the prison had been supportive and helpful, doing their best to resolve any issues which came up.

"I would recommend working with ex-offenders, our experience has been that the people that have come to work with us have been loyal and hard-working, many of them have moved on to become machine minders or forklift drivers and that is a fantastic opportunity for them and it is great for us as well," he said.