‘It’s wonderful when pupils get their eureka moment’ 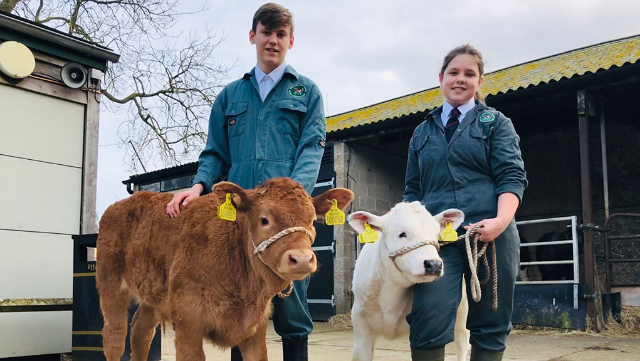 The number of school farms has doubled since the School Farmers Network launched. Sarah Todd finds out why the initiative has called on the farming community to support the cause.

Benefits to children attending school farms are more important than ever since the coronavirus pandemic. Sadly though, the futures of such educational holdings are under the spotlight as local authorities come under increasing pressure to make savings.

Formed in 2001, the School Farms Network is a pioneer in the field following its creation of school farms and gardens across the UK.

Founder Ian Egginton-Metters believes their benefits have transformed the lives of many children not just through education but with social and emotional support too.

Ian says: “It had become increasingly obvious there were a handful of teachers doing a huge amount of work, feeling isolated and always having to justify what they were doing.

“Over 20 years on and the support and advice the network offers is more important than ever. We’re living in a time when the education system is getting narrower and narrower - vocational learning is definitely not on the agenda of Ministers.”

Ian, who received an OBE in 2014 in recognition of his work, says he has seen many examples of children’s lives being turned around through getting involved in school farms.

He says: “It’s simple but true that if young people learn to care for an animal they go on to care for themselves and in turn other people. “I’ve seen kids kicked out of other schools for bad behaviour completely turned around. It’s wonderful when pupils get their eureka moment. It can be something simple like weighing out animal feed or logging the growth rate of lambs which then helps them turn a corner in their understanding of classroom learning.

“Mental well-being, concentration and attendance are core benefits of school farms. There is also the understanding of farm-to-fork and eating good quality locally grown produce.”

Offering support to those running or considering starting rearing livestock or growing produce in schools is at the heart of the School Farms Network.

The launch of a Facebook group has driven the organisation forward, with members posting questions from the simple, how to hatch eggs in an incubator, to getting access to advice on dealing with financial matters.

The network is constantly campaigning to get more help from farmers and the wider agricultural industry.

Ian says: “Something simple, like the loan of a trailer to take the schools animals to market, can make a huge difference. Most school farms are small and they cannot afford the investment of buying large pieces of equipment which will be rarely used.

“There are also areas such as supplying feed and fodder. Many school farms do not have the storage facilities to buy in bulk, so a farmer getting involved can help make cost savings.

“As well as loaning equipment, some farmers send youngstock – to be returned at a later date – such as pet lambs to the children.

“Stock gets well fed and looked after and in return the school gets access to the farmer’s expertise. Having the local farming community involved and supporting a school farm gives credibility, the power of which cannot be underestimated.”

In July the network will be hosting its conference at the Royal Agricultural University and it aims to encourage and inspire outdoor and land-based learning in schools, transforming lives and encouraging young people into agricultural further education and employment.

Ian says: “It would mean a tremendous amount to us if the farming sector would really get behind this conference and help raise its profile.

“From attending, sharing ideas and generally showing support of school farms through to sponsorship of our awards, there are lots of ways to get involved. We would truly appreciate it if people helped out where they can.”

A WORKING farm has been part of Brockhill Park for many years, since its beginnings as an all boys school.

A lot of students have gone on to study agriculture, animal science, veterinary nursing and one former pupil has become a vet.

Donna Ashlee is now vice-principal of the college, but started off as a stockperson on the school farm before
going on to university and getting her teaching degree.

She recalls other students who have gone on to be dog groomers, vet nurses, farm managers, dairymen, tractor drivers and many other agriculture-related careers.

“While some school farms are run as quite separate entities, ours is absolutely central to our whole ethos,” says Donna, who served as chair of the School Farms Network for several years.

Donna believes the fact that every single year seven and eight pupil receives one lesson a week based on the
farm is key to its success, rather than the farm just being accessible to certain groups of children.

These compulsory farm lessons are called the ‘great outdoors’ (GO for short) and cover the full life cycle from cows
being artificially inseminated through to birth.

Lucky students may get the possibility of showing a calf at Kent County Show before body condition scoring it and sending it as finished beef, some returning in beef boxes to sell in the school’s farm shop.

Donna says: “As well as the traditional farming calendar, we have widened our course to look at the environment and got involved in things such as tree planting to offset the school’s emissions.”

As well as having their farm shop, some items produced on the holding are sold back to the school canteen.

Donna says: “Having a farm on our school is a unique selling point. It is something different and unusual which encourages children to come to school, which in turn has a positive impact on the budget.

“The farm is not a token gesture, it is integral to the school. A total of 500 students a week are doing farm and
outdoor-related activities.

“Being a farmer has evolved from being basic manual work to operating high-spec mechanical equipment and systems such as GPS. Our animal management course is equivalent to A level biology.”

Donna’s husband is a local farmer and she believes building up a network of support within the surrounding agricultural community is vital.

“School farms need to be financially viable and the two main ways of securing this are getting as many children
involved as possible and building up a support network within the local farming community.”

THIS special needs school is a new build and the adjoining 3.2 hectares (7.9 acres) were turned into a farm in October 2019 after a fundraising campaign.

Headteacher Karen Joy is from a rural background and while many people would have earmarked the land for sporting facilities, she realised that such a development would not have been appropriate for all the pupils, aged three to 19 with varying degrees of learning, life-threatening and life-limiting difficulties.

Karen says: “We had always taken the children to farms on school visits and they were all able to get something out of it, not just a certain few.”

Just as the farm opened, the Covid-19 pandemic struck and it was an ‘absolute godsend’ as the pupils were cooped up at home unable to go out to parks or public places.

Karen says: “We stayed open throughout the pandemic and the farm helped to sustain the children’s mental health and provide a little bit of normality.”

Karen and her team have followed a policy of ‘quality over quantity’ when it comes to the animals stocked on the farm.

“We contacted breed clubs and societies to get animals of good quality which the children will be able to show.”

Animals on the farm include Kunekune pigs, Zwartbles sheep, chickens, rabbits and goats.

Karen says: “The farm is hugely motivating. Our children always want to go to the farm and it works brilliantly as a reward for good behaviour. It is so good for them to care for others rather than just focusing on themselves.”

As well as growing salad and vegetables, the children grow some feed for their animals. The school has started a Young Farmers’ Club open to all young people in the area and is keen to eventually offer work experience and other opportunities on the farm to other youngsters in the built-up area.

In common with other school farms, Abbey Court is keen to secure the support of the local community.

Karen says: “A local ploughing match used our land and made a donation to the school. Simple things, such as the loan of a livestock trailer or the removal of a muck heap make a big difference.

“Once people from outside the school have seen how much the pupils benefit they are always keen to help.

It is no exaggeration to say the farm has transformed lives.”