Students proving their worth 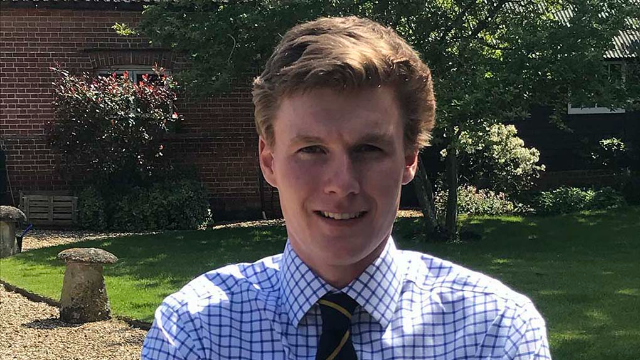 Employing students is not just of benefit to the student, securing valuable experience to launch a career after graduation. Clemmie Gleeson speaks to an estate manager and farm owner who believe students bring welcome gains to their enterprises, and to the students who benefited from their commitment.

Hugo Dwerryhouse was on a student placement with The Watership Down Partnership in 2018 when a car accident left him with multiple injuries and unable to work for several months.

He says: “I went to check on my own sheep, when only about a mile from home I came round a bend to see an artic lorry swerving.

It then rolled over and came down on top of me in my 4x4.

“I remember up to the impact and then hearing sirens and the Air Ambulance and the feeling of relief that someone was there.” Hugo’s injuries were severe and included a fractured skull, broken ribs, blood on the brain, nerve damage and his pelvis was broken in five places.

He says: “I am not good at sitting on the sofa, so for me to be sitting on the sofa for just over three months and not being able to do anything was really hard.” As well as incredible support from his parents and the team of doctors, he also hugely appreciated the support offered by Joe.

Hugo says: “He kept me on and put me on sick pay. He told me to focus on getting better.

I wanted to be back in time for lambing in March – that was the goal – but I came to the realisation that it was not going to happen.

I was still on crutches and unable to drive.

“I spoke regularly with Joe through it all and the whole team was great, keeping me up to date with what was going on on the farm.

I owe them a huge amount and I am very grateful for all that they did.

“I went back in May all guns blazing, but crashed and burned. I wasn’t capable of working full-time.

Joe was brilliant again and allowed me to come back part-time. “Perhaps he knew that if he didn’t allow me back I would not have coped.

I felt like I had lost everything.” Hugo’s returned to Harper Adams in September 2019 for his final year and was resolute that he wanted to graduate at the same time as his friends.

He says: “It was a slog, but Harper Adams was incredible and supported me.

I am generally back to full health now and, although I do still have some problems with fatigue and flashbacks, life carries on.

“I’m loving my new job as assistant manager for a 1,000- acre farm, just south of Thame, and looking forward to bringing some of what I learned on my placement to my new role.

“The whole experience has been an eye-opener that life is too short and we should make the most of every opportunity.

I’m now more driven than ever.”

Joe White manages 1,620 hectares (4,000 acres) for the Watership Down Partnership in Hampshire and is no stranger to welcoming student on placements.

As well as its large arable unit, contracting business, herd of pedigree Angus cattle and 1,000 commercial lowland ewes, the estate has a large property portfolio.

Joe says: “We have had placement students here pretty much every year since the mid-1990s.

We always need extra help at harvest and it is good to have a student on board.

“It is a good thing to do. For the students it is good for them to get practical experience of a busy working estate and commercial farm.

“It is important they realise farming is not all about sitting in a shiny tractor or combine all day.

There are mucky jobs as well as the decent ones.

They are involved in every single aspect of the estate.” He has taken students from all the main agricultural colleges, but admits it has proved more difficult to find the right candidates in recent years, although that has not deterred him.

He will continue to offer placements and believes there are benefits to doing so.

Joe says: “We like the idea of having someone for 15 months and then they move on.

“If we have a really sparky student who gets stuck in, it tends to lift the rest of the team.

It is good for morale to have different faces.

We have had a whole plethora of students, some excellent to others who you just have to wonder if they will ever make it, but I don’t regret having any of them.” In 2018, local student Hugo Dwerryhouse joined the team for a work placement as part of his degree course at Harper Adams University.

Joe says: “He came and worked over harvest and into autumn, but then had a terrible car accident.” The accident happened off the farm, while Hugo was returning home after checking his own sheep flock.

Joe says: “He was very seriously injured and off for a long time before coming back part-time.

“We saw him through until the following September and he would not have got through his final year at university without completing his placement.

It did cost us to do that, but it was the right thing to do to support him.” Young people and students in particular are the future of farming, says Joe: “Students will be running these farms in the next 15-20 years, so if we don’t give these students a chance to gain experience, where will they gain those invaluable lessons? You need experience to get a job and how else would you get that? Someone has to give them a break.

“Our students all say they have had a wonderful experience and we enjoy having them here too.

They are a part of the team at Watership Down.”

Jo Franklin and Robert Hodgson started their Kaiapoi Romneys business in 2013 with 200 ewes and 24 hectares (60 acres) of rented grazing.

The focus of the north Hertfordshire-based business is the integration of livestock and arable systems with sheep grazing included in the rotation plus forage crops and stubbles being grazed by lambs during winter.

As the business grew, Jo and Robert struggled to find a shepherd with outdoor lambing experience.

Jo says: “We needed somebody good to take things forward.

We tried advertising in different places, but it wasn’t working.

We want engaged people and people who can think for themselves, have good problem-solving skills, as well as all the basics about being polite and turning up on time – the things we don’t want to be thinking about.

We like someone who is keen for responsibility which takes a lot off our plate.” Meanwhile, Harper Adams student James White was looking for somewhere to spend his year’s work placement and a mutual friend put him in touch with the couple.

Jo says: “James was so capable and ran the sheep side of the business for us.

We could see a real difference in James’s confidence by the end of his time.

He was very shy at first, but towards the end he did part of a talk to the National Sheep Association with me.

He worked hard and was fun to be with.

Robert and I have been 100 per cent of the workforce for five years and built up the business, but James is a better shepherd than either of us, so we let him do what he is good at.” Having such a capable student enabled them to push ahead with developing other sides of the business, such as their upcoming sheep dairy, she says.

They have also recruited someone to the arable side of the business and plan to invest in his BASIS training.

Both Jo and Robert are Nuffield scholars and take staff to the Nuffield conference every year, as well as other events, such as discussion groups or open days to encourage new meetings and opportunity.

James’ placement was such a success that James will be joining the team full-time after finishing his course in June 2021.

James White is in his final year at Harper Adams having completed his placement with Robert and Jo in September.

His family has a small beef and sheep farm in Yorkshire and, with sheep being his main interest, he particularly wanted to find a placement with a large flock.

He says: “Their business is a lot bigger than ours at home and they have more focus on genetics.

I went to meet them and they gave me a tour to see what they did and we had a chat.

It was much better for me than a formal interview.” James spent a total of 15 months with them and thoroughly enjoyed it.

He says: “It was really good. I was doing my own thing with the sheep and it was really nice they had trust in me to do that.

I am a lot more confident now with everything like talking to landlords and speaking to customers buying ewe lambs.

I’m also more confident in my abilities with knowing weights and grades of lambs sent to slaughter.” As well as solidifying his knowledge, the placement taught him new techniques.

“Their business is completely different to ours. They use different worming strategies and lambing is different.

James believes placements are essential part of learning and to launching a successful career: “Nearly every job you see advertised says experience is essential, so it is important to be able to get that.”

James is looking forward to returning to Kaiapoi next year and, in the meantime, is working on completing his degree, including a dissertation on different lamb milk powders and their effect on lamb growth rates.

He plans to develop his own sheep flock alongside his role at Kaiapoi.

He says: “In the longer term, I would love to grow it so I could eventually set up on my own.”