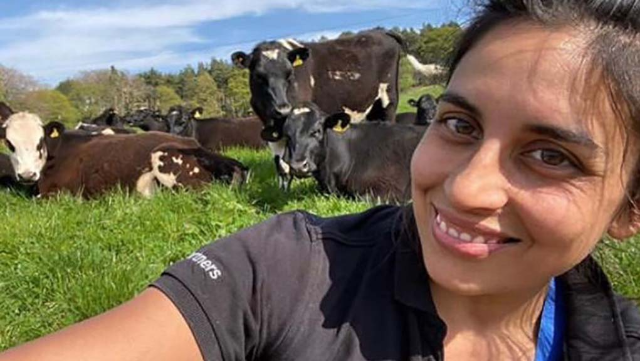 UNNECCESSARY remarks about someone’s gender or ethnicity can immediately put veterinarians on the back foot and impact their performance and mental well-being.

That was the message from Claire Whittle, a farm veterinary surgeon at LLM’s Whitchurch branch, Shropshire, who decided to pursue a career in the sector during her mid-20s.

"At school I did not know what I wanted to do, so I completed six weeks of French and Spanish at university before dropping out and working in various bars and restaurants around Liverpool," she said.

"I decided at 23 to get into veterinary school and completed a one year access course in medical science, a condensed form of biology, chemistry and physics, at Birkenhead College on the Wirral.

"I then went to Liverpool University’s vet school with the intention of being a small animal vet, but this changed to farm animals after doing extra mural studies [placements] as part of first year.

"I remember I bedded up the cows with hay instead of straw, but the university dairy farmer John Cameron took the time to explain to me the difference between the two and I ended up milking there at nights and weekends.

"Giving me that extra level of attention and time not only benefited me, but also benefited him too."

Ms Whittle said university was relatively inclusive, although it felt weird being among super excited 18-year-olds as a ’mature’ student.

"First year may have gone better if I had done A-levels in sciences, it felt like quite a jump," she said.

"I had some interesting work experiences where people have asked where I am really from, which puts you on a backfoot.

"I have also had quite a few comments about being a women, with farmers telling me I am not strong enough for the job or will need a man to help me.

"As a veterinary student or new graduate, going onto a farm as a woman, it feels like you are being judged immediately so you are already starting from a ’not good enough’ place.

"That is a horrible feeling to start with. Then if you do a bad job some farmers will associate that with your gender rather than it just being a terrible situation.

"But mostly the odd comments now blur into one."

After graduating in 2016, Ms Whittle worked at a practice in Dorset which she said was really supportive.

"A lot of new graduates do not get that good support base," she said.

"It is a very big change from university as you are going from a big peer group to smaller practices often in the middle of nowhere."

Having worked for LLM for five years, she said the team spirit and support makes it what it is.

"They will not stand for any nonsense," she said.

"If a farmer rings up asking for a male vet and I am the only available vet in the nearby area, then they say I will attend.

"In fact, the practice may be female heavy, switching that gender-bias."

She added, as vet school is predominantly female the industry needs to start making itself more attractive otherwise it could struggle to recruit new entrants.

"Some of the biggest barriers are even getting into vet school in the first place," she said.

"It relies on top grades, which are important, but communication skills are also key.

"It is a career not given to most as an option unless they are getting top tier results and we need to be more open to taking on students as vets and having conversations."

Funding was another barrier, with those pursuing a career in veterinary racking up a £45,000 in debt by the time they graduate.

"This can exclude a lot of ethnic minorities who are often from lower income backgrounds," she said.

For Ms Whittle the best thing about her job is the sense of community.

"You do not get that in other sectors," she said.

"Everyone knows everyone and you build relationships with the farmers and get to know their families and their business.

"That said, we need to do more in terms of reconnecting urban and rural communities, especially as we have an ongoing labour shortage in agriculture.

"If we think the only people who can do the job are those that have already done it before, then the industry will not last very long and that is something everyone should bear in mind."