#FarmingCAN - An interview with George Lamb 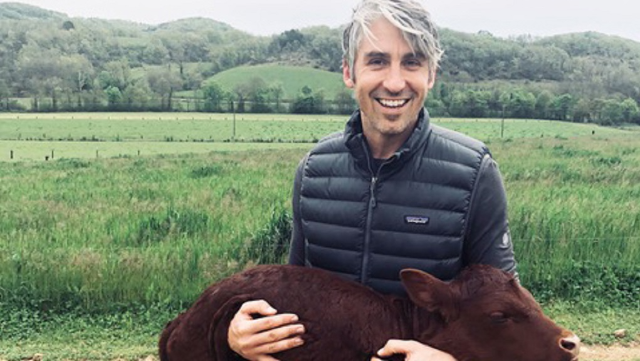 George Lamb has graced our TV screens for years, presented numerous popular prime-time radio shows and probably has one of the most recognisable voices in the media.

But you are currently more likely to find him roaming the 6 acres of land at the Totteridge Academy community farm in North London, where his project GROW helps connect the school’s students to food, nature and wellbeing.

Set up in May 2019, George was inspired by good friend, Andy Cato, and they set up Wild Farmed, a farming business that encourages the preservation of nature alongside food production. GROW was then borne from his want to do more.

The project is still in its early stages, but George’s vision is quite clear: that if we do not reconcile our relationship with mother nature now, we are looking for trouble.

He hopes to be able to instigate change through GROW and its four key pillars which are GROUND, THINK, FLOW and THRIVE, teaching its students about how fundamentally, nature and connection is core to all we do.

“The whole thing started with me coming to the conclusion that if we don’t change our relationship with the natural world and our behaviour towards our food systems, I think we’re in big trouble,” says George.

“Irrespective of how much of an urbanite you are, you put clothes on your back or food in your belly and that’s the point of intersections, where you’re joining up to the natural world.

“If I can set up a programme that redefines that connection and gets you to understand where stuff comes from and how it works, that is ultimately only going to have an effect on the bigger picture.”

George believes that we cannot stay at our current ‘level of disconnect’ and the way forwards is through education, with high hopes that by 2030, this could become part of the national curriculum.

He says: “Ultimately life is all about connection – to nature, to yourself, to your community and you can pretty much learn all you need to know by getting outside, putting your hand in the dirt and growing stuff. All the lessons are there for you.

“Somehow we have started to prioritise the brands of shoes we put on our feet or the brand of phone in our pocket over the quality of the food that goes into mouths. None of that other stuff will keep you alive but food has gone down the pecking order which is peculiar.

“We’re only two years old and 12 months of that has been the pandemic. We’re probably two more years away figuring out what works and what doesn’t.

“We’re doing the proper research - let’s see how it affects attendance rates and academic performance – there is going to be a wide range of effects that GROW can have on a school.

“We’ve got 110 schools in our immediate network so if you can model that, I’m pretty sure you can get the Department of Education to take it to the next [level].

“Just taking kids out into a different environment and showing them things – you’re in the best computer game you’re ever going to be in.”

Exposure to farming and food production at any level is key to opening up our industry to potential future employees too, but, says George, there must be systematic changes.

“We’ve got to show viable, sustainable roots to employment.

“There doesn’t seem to be [farming] role models that look like a viable alternative to what you could be doing for a living.

“Food prices are illusionary – it’s not real, so when people go to farmers markets and ask, that costs how much? Farmers aren’t driving off in Lamborghinis.

“That’s the price, that’s what it costs, and we all think the price is a tenth of that because that’s the supermarket price.

“As a result, the little person gets squeezed and when you look at lives in agriculture you think I don’t fancy that, you get trodden on left right and centre.

One of GROW’s key focal points is to show the next generation what farming could look like in the future.

This is, he says, animals and plants living in symbiosis to put nutritious food on your plate, and ‘pack carbon into the soil.’

But whether learning through a community farm, or getting children out into the countryside, he firmly believes that they need to be exposed to such things through everyday education.

“I think you have to get them hooked in on a day to day basis and our job is to put as much in front of them and let them go with it.

“Little ones go crazy for animals and tractors but then we’ve got a shortage of farmers – what has happened in the middle?”

Moving forwards, George naturally wants GROW to be able to reach its full potential. He has recently set up a crowdfunding page that will enable the project to expand but would ideally like it to reach further and wider.

“I can make something work in London because I’ve got access to 8 million people so will be able to fill the roles that I have but how am I going to be able to exchange that same level of information in the rural community?”

With hundreds of students already in the throes of GROW and enjoying the experience it provides, he only hopes that he can enable these children to feel more connected to the environment GROW provides.